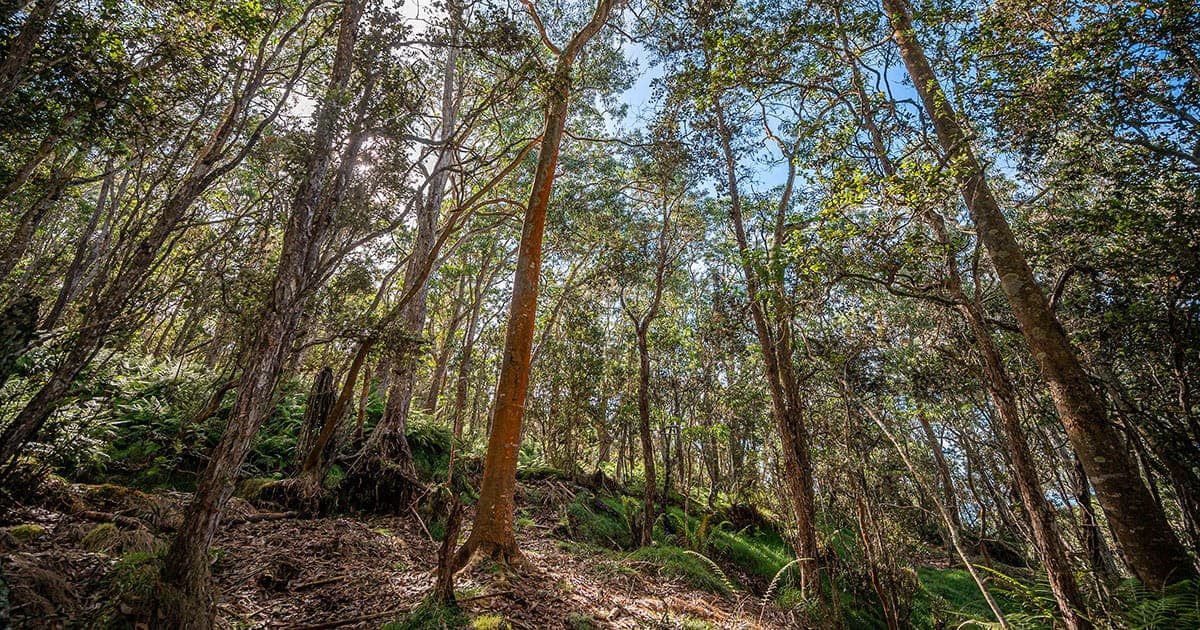 To win, solutions will need to beat the largest existing carbon removal system on Earth: forests. That means the winning solution will need to be cheaper than $7 per ton — the cost of carbon dioxide removal with forests.

Here’s how forests stack up against the three proposed contest criteria.
‍

Operate a full carbon dioxide removal (CDR) project (or projects) at a combined scale of 1,000 tonnes of CO2 removed per year.

One acre of young forest sequesters about five tons of carbon dioxide (CO2) every year over the first three decades of growth. To sequester 1,000 tonnes of CO2 per year would require 200 acres of young forest.

This can be rigorously validated by measuring tree size, mass, and growth, and comparing with known tables of fractional carbon makeup on a per-species basis.
‍

Calculate the fully considered cost per tonne at the 1 megatonne (1,000,000 tonnes) per year scale. The calculation must include all costs over the life of the project. Judges will also consider costs of risk and externalities, as well as revenue and value creation.

The best cost estimates for large-scale reforestation come from China, which has spent about US$80 billion over the past two decades reforesting 84 million acres of degraded land. That comes to an average of $952 per acre. Other global estimates confirm restoration plus ongoing maintenance costs of approximately $1,000 per acre.

Using the numbers above, we’d need about 200,000 young forest acres to sequester one million tons of CO2 in a year. Restoring 200,000 acres of forest would cost approximately $200 million.

This is where trees truly set the standard: The upfront cost of $200 million replants the forest acreage necessary to sequester a megatonne of CO2 per year, and covers ongoing maintenance until the forests are self-sustaining. Once established, the forests continue to sequester carbon for decades. The rate of sequestration will taper off over time, but even centuries-old forests continue to act as net carbon sinks.

That means the cost to capture and store each ton of CO2 using forests is $6.67.

There are very few carbon capture mechanisms available for implementation today for under $10 per ton. The most promising direct air carbon capture technology costs nearly $100 per ton of captured CO2.

Forest restoration is a low-risk carbon capture solution. The solution is already very well tested. Restoring native ecosystems where they once were returns land to its previous equilibrium. One of the largest risks is disturbing local water cycles, but newly affordable solar-powered desalination can provide new freshwater to arid regions and mitigate the risk of overtaxing existing water supplies.

The restoration process can also be closely monitored for adverse impacts; tree planting can stop at the first sign of negative impacts, and the process can even be reversed by chopping down the trees.

Restoring forests also generates economic benefits. Forest products, including food and fiber, generate new revenue streams. Studies of private revenue from restored forest suggest a single acre can generate $350 to $650 in revenue (not including carbon credit sales) over 50 years. Applied over the full 200,000 acres in this thought experiment, this forest land would generate roughly $100 million in marketable products.

Accounting for this revenue further decreases the cost to $3.33 per ton of CO2.

The restored forests will also deliver more diffuse benefits to local communities and economies in the form of ecosystem services like cleaner air, flood control, reduced water treatment costs, and greater agricultural productivity. The value of these public benefits could represent four times as much as the private revenue streams, more than repaying the initial investment.

Provide evidence that the solution is sustainable today and can achieve gigatonne (1,000,000,000 tonnes) per year scale in the future. Teams must also demonstrate plans to maintain their CO2 stores for at least 100 years and account for impacts on the natural environment and social equity.

Using the numbers above, we’d need about 200 million young forest acres to sequester a gigaton of CO2 in a year. Conservative estimates find at least two billion acres of land currently suitable for forest restoration, enough acres to sequester at least 10 to 12 gigatonnes of CO2 per year.

Solar-powered desalination will make as much as one billion more acres available for restoration that were previously considered too dry to support reforestation projects. These carbon capture estimates are conservative, as they rely only on aboveground carbon capture and do not include carbon held in belowground biomass and soils.

Although individual trees will live and die in a forest over time, the entire ecosystem continues to grow and store carbon for centuries, if sustainably managed. An individual tree will seed many children during its lifetime, and when it dies, new trees take its place, while the decomposing parent feeds the next generation. Together, this system takes up all the CO2 released by the dead parent, and much more. As forests age, they grow denser and continue to increase their carbon sequestration capacity for centuries.

The Earth’s existing forests, which sequester 7-13 gigatons of CO2 each year, are thousands (some of them millions) of years old. Loss from catastrophic disasters, like forest fires and deforestation, affect only a fraction of total forest cover each year. By some measures, tree-planting and natural regeneration more than compensate for these losses, and global forest cover has increased over the last three decades. While young forest does not hold as much carbon as old-growth forest, over the long term, forests are a self-replicating carbon capture solution that have worked and persisted for millions of years.

Forest restoration can harm communities when external project managers disregard local stakeholders. Harms can occur through a variety of pathways, including by restricting access to food and fuel sources. In fact, lack of community engagement is a leading cause of project failure.

Unequal distribution of costs and benefits presents another potential pitfall of forest restoration. While reversing climate change has global benefits, many of the ecosystems with highest carbon storage capacity are in the global South. Yet, emissions from development of the global North have been the main driver of climate change. Forest restoration places some of the cost of this climate solution on the global South by restricting land development opportunities. Requiring the highest emitters to pay for carbon storage at the full social cost of carbon can level this cost/benefit mismatch.
‍

This carbon capture solution is ready to go

Forest restoration is a decentralized solution, so a lack of government consensus won’t stall progress, as with many other carbon capture solutions. Project startup costs are relatively low, allowing a diversity of actors to get involved. The social and economic benefits of forests accrue to communities around each project site. So not only will this effort provide tremendous global environmental benefit, but it also could be an economic driver for communities around the world.

Any other carbon removal solution must demonstrate that it can achieve these goals more effectively, at a better cost point, and in as safe a manner.

A few notes on our methods