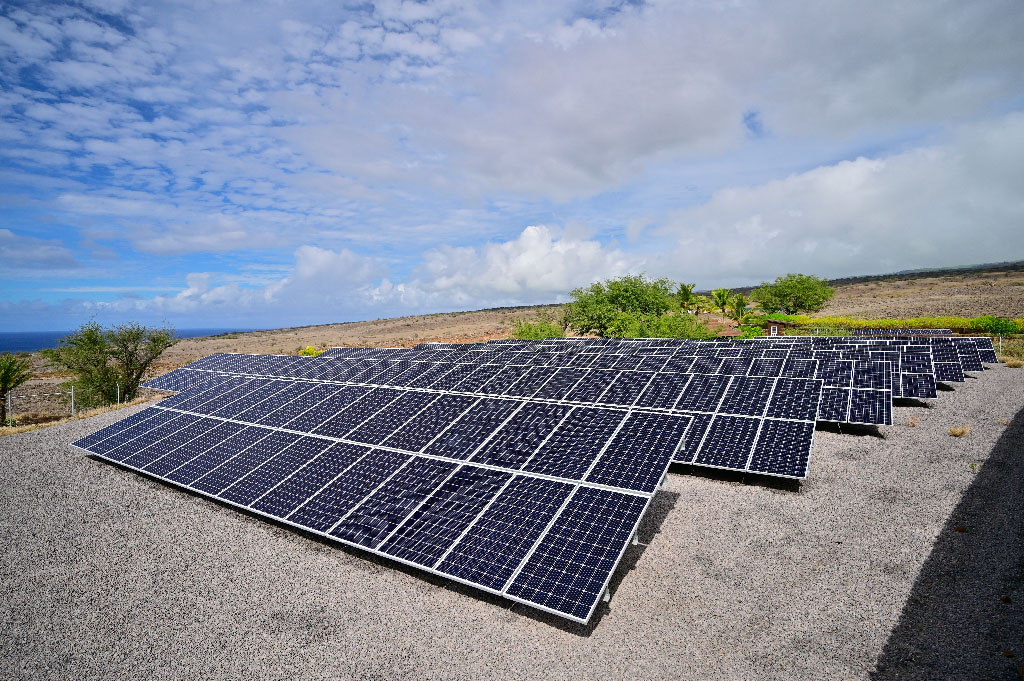 Reverse osmosis (RO) desalination could provide supplemental freshwater, but it’s energy intensive. Powering the process with fossil fuels would undo most or all of the carbon benefit of the new forests.

But over the last five years, something really important happened — the cost of solar power dropped below that of coal and gas. And this has unlocked an opportunity to do what couldn’t be done before: sustainably reforest desertified regions via solar-powered desalination.

This technology opens huge new pathways for forest restoration, accelerating carbon drawdown on a planetary scale. Terraformation is committed to making this solution available around the world.

To prove out this technology, we constructed the world’s largest fully off-grid, 100% solar-powered desalination facility at our Pacific Flight at Kaupalaoa flagship restoration site. There are other larger desalination plants, but they are all grid-tied, or at least partially reliant on fossil fuels. In contrast, we are completely independent and 100% powered by solar energy.

Our plant is located in North Kohala, on Hawaiʻi’s Big Island. Sandalwood forest once covered the region from the mountains to the shore. Hundreds of years ago, the entire forest was cut down to supply the profitable sandalwood trade. Denuded of its cover, the region slowly desertified, the soils degraded, and invasive plants took over, choking out the remainder of the native ecosystem.

We’re using solar-powered RO to restore a 45-acre parcel of this lost forest. As of November 2020, we are sustaining over 1,000 native trees at Pacific Flight with the support of our desalination system. Our facility produces 128,000 liters of freshwater per day (34,000 gallons/day), more than enough to support several thousand more trees.

Desalination is ideally suited to intermittent renewable power sources like solar and wind. One of the biggest drawbacks of these energy sources is that they can only generate electricity when the sun is shining or the wind is blowing — a problem known as intermittency. That poses a problem for most residential or commercial projects, where people need power around the clock. Storing daytime energy for nighttime use requires expensive batteries that add huge costs, and is a major hurdle to transitioning our grid to renewables like solar and wind.

But with desalination, we can simply desalinate water when power is available and store it in tanks for irrigation later. In essence, we exchange expensive batteries for inexpensive storage tanks, which cost less than one-tenth the equivalent energy storage.

The favorable economics allow desalination to leapfrog the solar transition for residential and commercial utility grids, and means that we can begin scaling up solar-powered desalination in locations across the globe.

Desalination is a restoration kickstarter

Biomes are self-sustaining. If we deforest a region and make it a desert, it remains a desert. If we reforest that region, it will actually sustain itself, too: plants cool the atmosphere and cycle their own water. This means that if we can reforest and irrigate a stand until its trees mature, we can reestablish a self-sustaining forest. That’s the promise of solar-powered desalination technology.

Many determined communities have reclaimed desertified ecosystems, but the process is complex and labor intensive. The technologies we employ at our facility demonstrate a full end-to-end system that other communities can replicate, and we intend to give away our designs.

Our project is just a small beginning within the entire North Kohala region. But successfully reforesting this area shows that it can be done — not just here, but around the world. Accomplishing this on a planetary scale could yield enough restored native forests to close the gap in solving our global emissions problem, protect biodiversity, and prevent climate collapse.

If you are in the area and would like to drop by for a tour or have any questions, please contact us at info@terraformation.com.

Get updates on our work scaling natural carbon capture around the world.