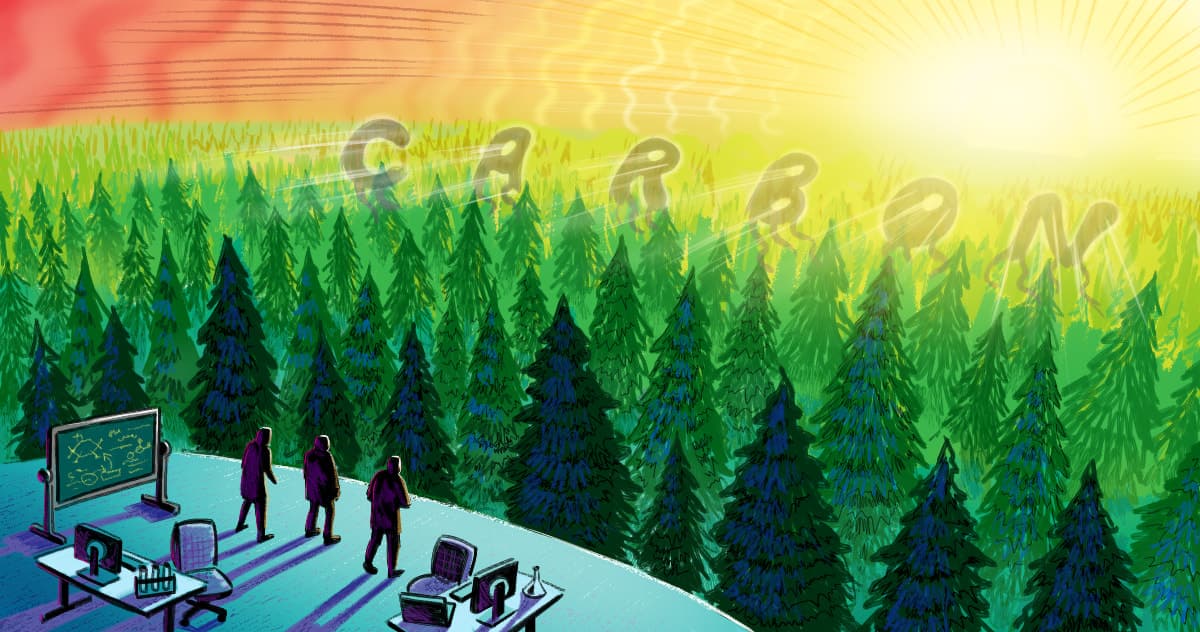 Illustrated for Terraformation by James Yamasaki

One common objection to forests as a climate solution is that trees “take too long to grow.” In terms of cost, safety, and scalability, massive reforestation is by far the most promising carbon capture solution, but a forest needs a minimum of 10 years, in many cases 20 to 25, to establish and ramp up its carbon capture rate.

Yet, even growing a forest for 25 years is the fastest solution we have, faster even than more technologically oriented solutions.

How can this possibly be the case? Isn’t technology fast? Isn’t the mantra of the tech world “Move Fast?” Hasn’t technology sped up every aspect of our lives?

Here’s what many people don’t see behind-the-scenes when it comes to technology products: every ubiquitous tech product goes through three main phases of its lifecycle:

Each of these steps takes about a decade or more to accomplish.

Mobile phones are a great example: they are one of the most useful tech products in modern history. They add so much value that there is absolutely no shortage of demand; their spread is constrained only by the ability to produce them in sufficiently large and affordable quantities.

The first cell phone was invented in 1973 by Motorola. It was a big clunky device and it cost about $10,000 in today’s money. This was Phase 1. In the early ’80s, models came out that were accompanied by a suitcase, and you probably saw films with a rich guy in a sports car that had one of these suitcase cell phones.

It wasn’t until the mid-’90s when you saw cell phones more widely available … if you had a few hundred dollars. Your first-adopter tech friends probably had one around this time. This is Phase 2.

And finally, it wasn’t until 2020 — when nearly 70% of the world’s population had a cell phone, with more than half of these smartphones — that this tech reached Phase 3.

This is a span of nearly 50 years. It represents one of the fastest-growing industries of all time, but even so, the time from the first working model to a feasible consumer-grade device to billion-scale worldwide adoption took nearly half a century.

Any global-scale solution to climate change represents a scalability challenge beyond that of any project that humankind has ever contemplated. This is what makes the 10-25-year time frame for massive global reforestation so attractive.

Reforestation has a head start

Trees have already accomplished Phases 1 and 2. Forests are already a durable, proven carbon drawdown mechanism, sequestering some 13 billion tons of CO2 every year. We already know how to plant trees and regrow forests. Indeed, the past 30 years have involved many reforestation attempts, some resulting in failures and some in success. As a result, we know a lot about successfully restoring self-sustaining and diverse native forest ecosystems.

The necessary technologies needed to make additional land fertile and irrigate new forests are solar panels and reverse-osmosis desalination, both of which are also in late Phase 2. That’s because Phase 1 began 70 years ago. Phase 2 ramped up in the early 2000s, when enormous amounts of money were poured into solar power and other alternative energy methods (“greentech”). Many of those companies failed, but the ones that survived continued to refine the technology and push down prices. Only now, two decades later, has solar power reached a level of maturity that it can serve as a component of a climate change solution ready to scale to gigaton levels.

In contrast, many technology-based climate solutions are still in Phase 1 (or haven’t even reached it). When you read a headline like “Scientists at the University of X have found a way to produce Y magical new carbon-sequestering device” or “Pilot plant for Z new energy production method scheduled to come online this month,” it means that the solution is roughly 10 to 20 years away from full commercialization, at which point it will be another 20 to 25 years before the necessary supply chains and factories can be set up to scale to gigaton levels of efficacy.
‍

Yes, it takes that long

If you’ve worked in technology (especially if you’re an investor), you know this.

I’m not knocking technology-based solutions. Indeed, I am a technologist at heart. But I’ve also worked on developing new technology and I know it always takes longer than you expect. We don’t have a lot of time when it comes to climate change, and we have a very large problem to solve. We need simple, proven components.

Taking any response to the climate crisis to a global scale — executing Phase 3 by creating factories, supply chains, and distribution networks — is a massive undertaking. It will be the hardest thing the world has ever tried to do.

Let’s make it more likely to succeed by picking a solution that’s already finished the first two phases, involves low-cost, proven components, and is already working at scale: there are 3 trillion trees on the planet right now, and the ecosystems they anchor sequester billions of tons of CO2 annually.

When it comes to massive reforestation, we know what forests can do. We know how to restore and create them. Forest restoration offers a shovel-ready carbon capture solution. It is not only the most cost-effective and safest method of capturing carbon, it is also the fastest possible solution at hand, and we should begin scaling immediately.