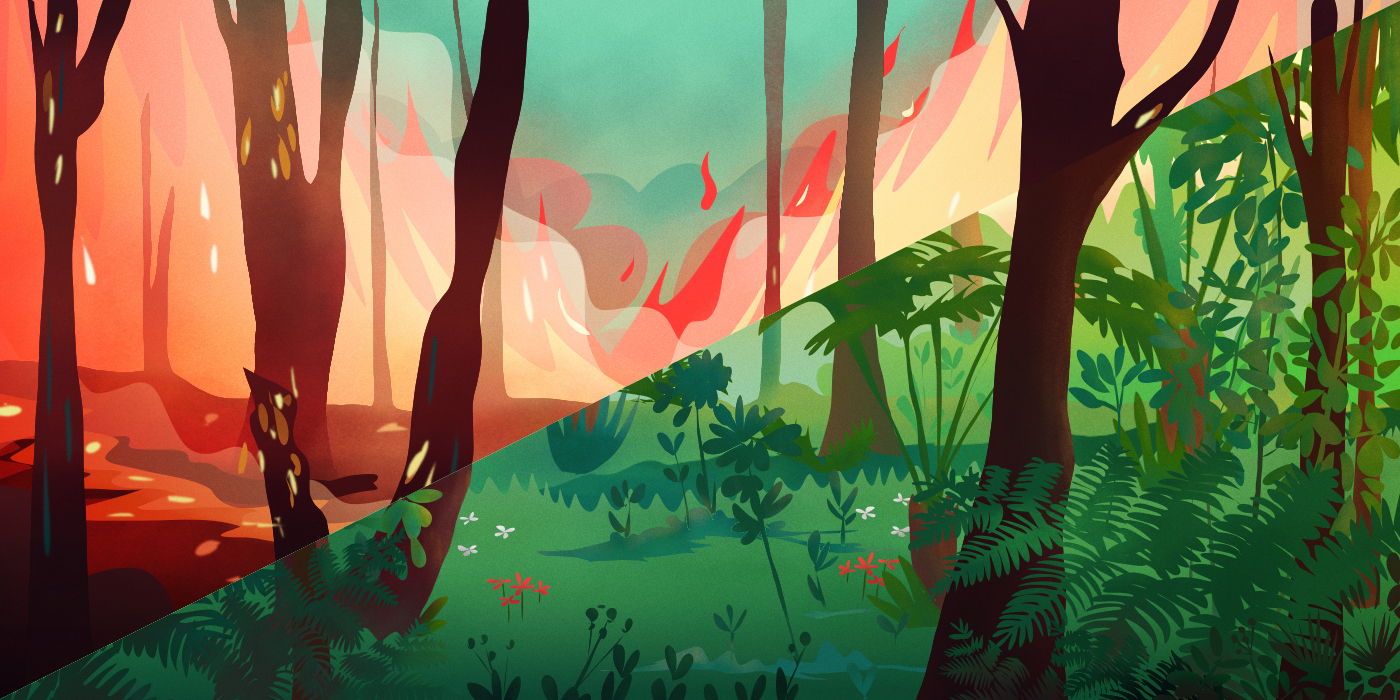 This summer, Hawaiʻi Island experienced the largest wildfire in its recorded history. By the time the smoke settled, nearly 40,000 acres of the Island had burned. The fire put thousands of homes in danger and contributed to a larger global trend of longer and more intense wildfire seasons.

A variety of factors contributed to the intensity of the blaze, including a summer drought. Invasive species also fueled the fire’s spread and heat. Restoring the Island’s native forests could reduce the likelihood of major burns like this in the future.

Wildfire season is getting longer and more severe

The number of acres burned in the western United States every year has been creeping up steadily for the last five decades, according to NASA’s climate change research team at the Jet Propulsion Laboratory. National Geographic estimates that over the past 40 years, the average number of forested acres burned by wildfires annually in the US has increased by 1,000%.
‍

The western US has seen a steady increase in number of fires over the last several decades.

Before 1970, megafires — fires that burn more than 100,000 acres — were extremely rare in the US. Though megafires can be natural in some ecosystems, their frequency and intensity are markedly increasing due to a variety of factors, including changes in weather patterns due to climate change, drought, forest management practices, and invasive species.

Drought, in particular, can be a key driver of fire, and it's no coincidence that the last several decades have also included the hottest years on record. The extreme heat has dried out ecosystems. Rainfall is less frequent, and the period between rain events is farther apart.

That constant dryness means that plants become brittle. During a wildfire, dried-out plants such as grasses and trees quickly turn to fuel.

Some places, including Hawai’i, are experiencing larger, and more intense wildfires due to invasive species.

Fountain grass (Pennisetum setaceum) is native to North Africa but this highly invasive species has become rampant on several Hawaiian islands, as well as in California, Nevada, Arizona, and several regions across Italy, Australia, and South Africa.

Over the years, this “burn on burn” cycle can transform whole regions into monotypic stands of windswept fountain grass. On Hawaiʻi Island, this process has become so extreme that many people assume grasslands are the region’s “natural” ecosystem.

The devastation caused by this invasive species has spread far beyond Hawaiʻi. A 2019 analysis found that some invasive grasses can increase fire frequency by up to 150%. This has occurred across US ecoregions and vegetation types, driving fire frequency and intensity. ‍

How we can predict — and protect against — future wildfires‍

Global warming caused by greenhouse gas emissions will likely increase the likelihood of very large fires across the western US and beyond by mid-century. Effects of global warming, such as heatwaves and declining soil moisture, breed “fire-friendly” environments that make predicting and planning for future wildfires even more urgent.

Tools for detecting fires, such as smoke sensors and drones, have become more precise over the years, and could be game-changers for wildfire prevention. These early warning systems are powerful tools to stop fires before they get too large and out of control.

While technology helps mitigate fires after they begin, preserving and restoring native ecosystems, and protecting them from invasive species can prevent wildfires in the first place, and reduce fire intensity when blazes do start.

Rebuilding native habitats and preserving the ones we have can help reverse the recent rise in fire frequency. Every time we lose plant and animal life, we lose systems that support each other and the diversity of genetic material that builds resilience. And where there is diversity, there is an opportunity to adapt and survive.